What is the market size of peer to peer finance ?

“Peer-to-peer lending is growing fast in many countries. In Britain, loan volumes are doubling every six months.” (The Economist, March 1st, 2014)

Peer to peer finance, i.e. p2p lending to consumers, p2p lending to businesses and crowdfunding, is definitely growing very quickly, and is attracting a lot of attention – from the finance industry, but also consumers.

My intuition however was that it is still very small compared to traditional finance, and I wanted to know the real figures.

Before jumping to the figures, remember that it is challenging to compare a very mature industry vs. a new market. For example, we should ideally dive into net and gross lending figures – but they are the same for peer to peer finance because there are no repayments yet !

The two largest and fastest growing markets for p2p finance are the US and the UK, and we will look at both.

P2p finance vs. traditional finance in the UK

which gives us the two following graphs 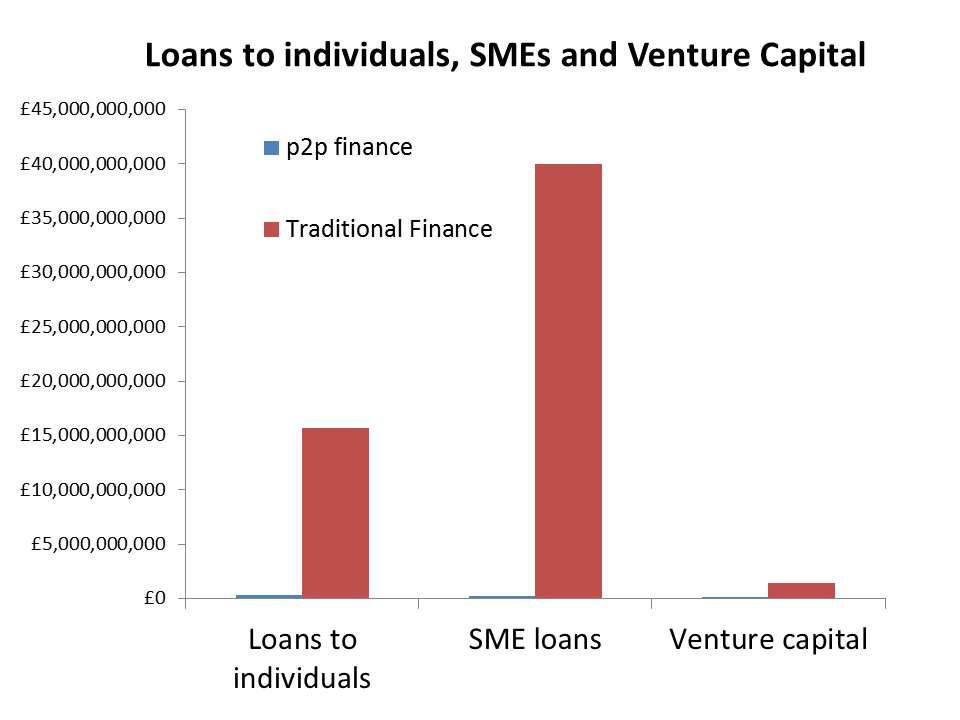 The graph above clearly shows that in the UK, Venture Capital is very small vs. lending to SMEs and individuals. SME lending is around £40bn per year, unsecured consumer lending 3 times less, and venture capital 40 times less. Peer to peer finance is minuscule on that scale. 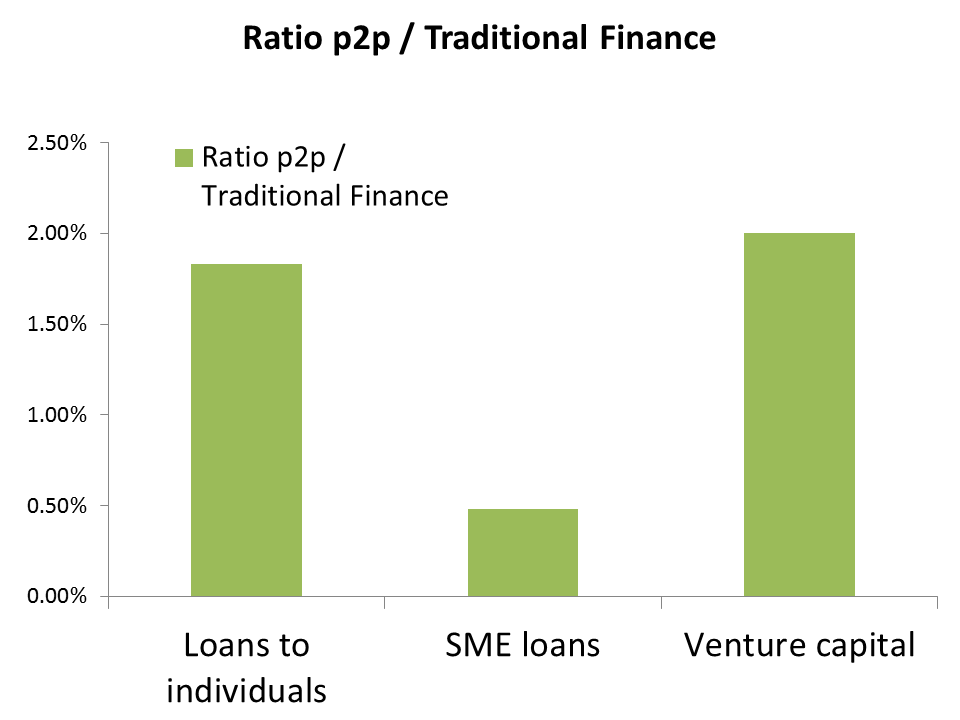 From the graph above, we can see that peer to peer finance represents less than 2% of traditional finance in all categories – with a better penetration for equity crowdfunding and consumer p2p lending vs. lending to businesses.

P2p finance vs. traditional finance in the US

As you will see, the figures for the US are very different from the UK. 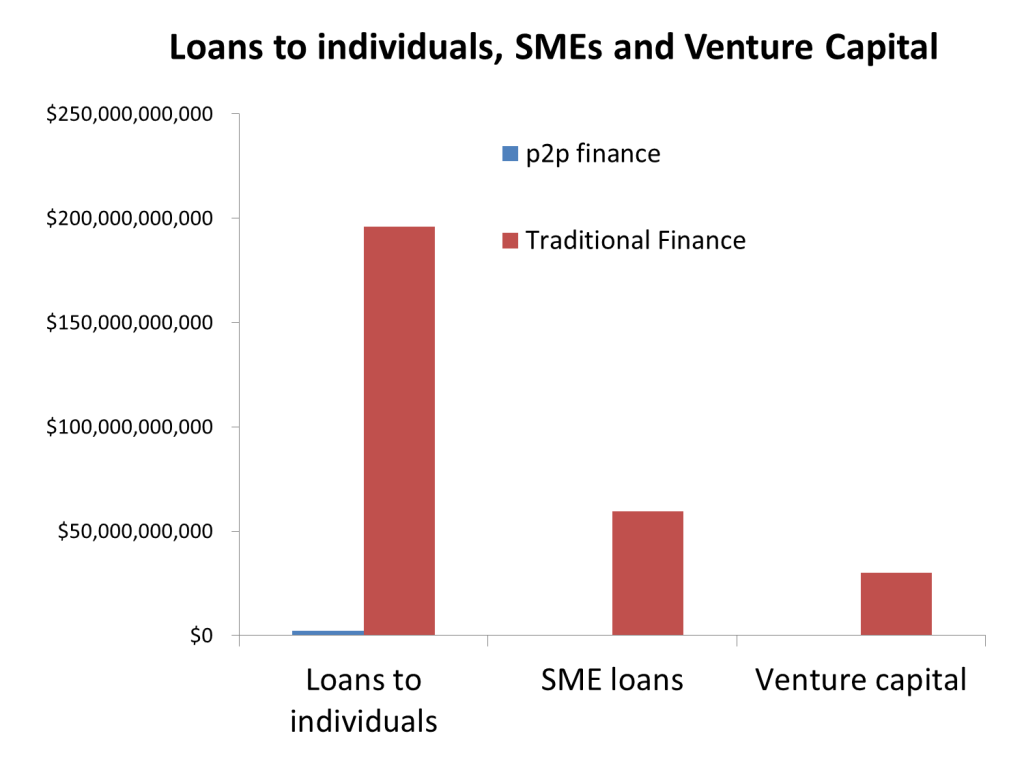 Please note that this graph cannot be directly compared with its UK equivalent because Loan to Individuals is NET (and not gross). Also, US numbers are distorted by student loans that represent 2/3 of unsecured loans. We can note however the much bigger importance of venture capital in the US vs. the UK. In other words, unsecured consumer lending is around $200bn per year, SME  lending 3 times less, and venture capital 6 times less. 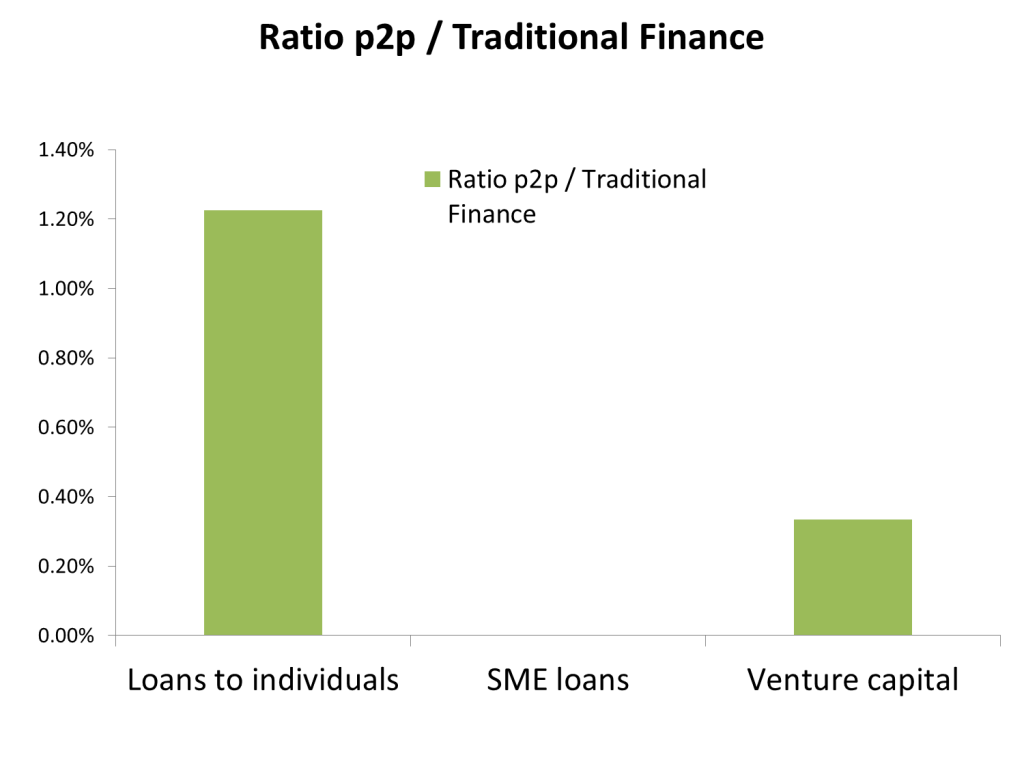 The figures shows a slightly smaller penetration for p2p lending to individuals in the US vs. the UK. But the striking difference is the absence of p2p finance for SME loans, while equity crowdfunding is also very small.

P2p finance  has taken between 0 and 2% of market share vs. traditional finance, which is still small. However, with growth rates sometimes exceeding 100%, this is clearly a disruptive sector that will have an impact on lending markets.

Regulations will clearly have a very important impact on the development of p2p finance – witness the slower development of equity crowdfunding in the US because of the requirements on accredited investors. Based on the current regulatory environment, the UK – with its light touch regulation on p2p finance – could witness a faster growth than the US.

« What is the value of Bitcoin ? » Should you invest in Fintech ?