What is the value of Bitcoin ?

Bitcoin is definitely not leaving people indifferent. Some say it’s an out of nowhere Ponzi scheme created by anti-system fanatics who want to revolutionize our world.

Others see it as the foundation of a new monetary world where Central Banks will not be needed anymore and money will be controlled by the people.

In my opinion, Bitcoin is none of these. First, what are the key features of Bitcoin :

– It’s a medium of exchange. Clearly, people can use it to buy and sell goods and services.
– It’s not a unit of value. Today there are very few goods or services with a fixed price in Bitcoins. Prices are usually in their original currencies (i.e. dollars), then converted back at the prevalent rate of Bitcoins.
– It’s not a store of value. This is quite obvious when we consider that 1000 Bitcoins could buy you either a Ford, a Porsche or an Audi over the space of 2 years…

Bitcoin is therefore not a currency, failing 2 out of the 3 features of a currency. Another very important feature – and part of the design – of Bitcoin is that it removes the need for trust. The whole financial system is based on trust, at many levels.

– At the government level, citizens trust that their government will have sound fiscal policies and a stable government which should lead to a stable currency. If not, the currency quickly loses its value (e.g. Germany in the 20s, Zimbabwe, Ukraine today, etc.)
– Then depositors also trust the banks taking their deposits that their money is safe. If not, it’s a classic run on the bank.
– Finally, payees trust that their payments will reach the recipients, even if they are on the other side of the world. If not, it’s the paralysis of global trade. 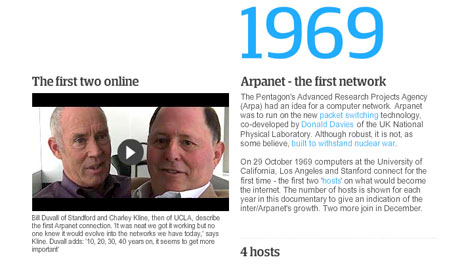 Arpanet laid the foundations of decentralized communication and led to the Internet. Could Bitcoin do the same for digital currencies ? (From the Guardian)

By design, Bitcoin removes the need for trust and replaces trust by collective oversight – with an open ledger of all transactions. This is very important because it helps to solve the problem of “double spending”. However, it is not enough to solve the trust that consumers would need to have in Bitcoin. Bitcoin is therefore a revolution in digital currencies, but has too many structural weaknesses today to make it an alternative to currencies or even to a a payment system. However, Bitcoin could be to digital currencies what Arpanet was to the Internet. It has opened the door to the very important idea of a collective management of a currency, based on a distributed network. At this stage, the easiest application would be to use such technologies to faciliate payments – which is disruptive enough considering the size of the payment industry.

« Will peer-to-peer lending revolutionize lending ? » What is the market size of peer to peer finance ?