Why “different” is better than “better” in Fintech

I had the pleasure to speak at Imperial College a few weeks ago, as part of their programme called “Suits in the Garage” (It was a very appropriate name indeed since I usually wear a suit, and started as an entrepreneur working on top of a garage – although most young entrepreneurs based at WeWork or Level39 might struggle to understand the concept of “garage” for startups, but I digress…).

It was a great evening with Nic Cary (co-founder of Blockchain), Viv Diwakar (co-founder of Impala), and Iain Stewart (Bitcoin researcher at Imperial College) – and with quite diverse views on Blockchain, which was excellent. Another good surprise was the presence of a large group of MBA students from Vlerick Business School in Belgium, where Prof Bjorn Cumps has very impressively designed a full Fintech programme for the students.

Since it was a very packed evening, Jonas Van Hove, the organiser, had given me 12 minutes to 1) introduce myself, 2) tell the audience what I liked about Fintech, 3) discuss the opportunities in developed and emerging markets, 4) give my views about Blockchain, and 5) highlight interesting examples of Fintech startups – quite a challenging task! I am quite proud of having achieved that challenge, and it really forced me to think of my message in a very concise way.

In particular, I found that I could summarise what I liked in Fintech with 5 simple words as follows: “Different” is better than “Better”

What I mean by that is that technology allows new entrants to do things better – i.e. faster, cheaper, more scalable, with a nicer user interface, etc. A simple example would be for example the generalist challenger banks that compete with the high street banks by offering a nicer mobile interface, lower fees, and benefit from a lower cost base through newer technology and less physical infrastructure. This is what I would call “Better”.

On the other hand, what I call “Different” would be a startup which business model is not too compete head to head with an existing service, but designs a product in response to a need they have identified in the market. An example of that was for example peer-to-peer lending a few years ago, that was a real product innovation, and was made possible by the growing popularity of the marketplace mindset.

Let’s compare the two models of “Better” and “Different”

This is at first sight the approach a la Low Cost Carriers, which offer a similar service than traditional airlines, but at a much lower cost thanks to a newer fleet. This is a model that I find very interesting, but is nonetheless much more challenging than most people realise. The reasons are two-fold:
– We tend to think of the Ryanair or Easyjet of this world as simply doing the same as British Airways or Air France, but at a cheaper cost, and with a standardised fleet. In finance, that would be equivalent to thinking that a newer technology, and fewer branches would immediately lead to such a success. This would be a mistake, because that overlooks the profound changes in business model between a LCC and a traditional carrier: instead of having central hubs, LCCs fly from point to point, their flight distance is half those of traditional competitors, the naked ticket price is much cheaper, but almost everything else is subject to an additional fee, etc. In other words, the growth of Low Cost Airlines is explained not only by their low cost structure, but also by a very different business model.
– The success of Low Cost Airlines also comes from their answer to a real immediate need. There is therefore little effort for a consumer to choose between Easyjet and British Airways. In the world of finance, a similar example might be FX transfers. On the other hand, opening a new bank account is usually not an answer to a real immediate need, but much more to a general vague need, which makes it much more challenging.

Let’s have a look at how easy – or difficult – it is for better services to compete with existing ones: 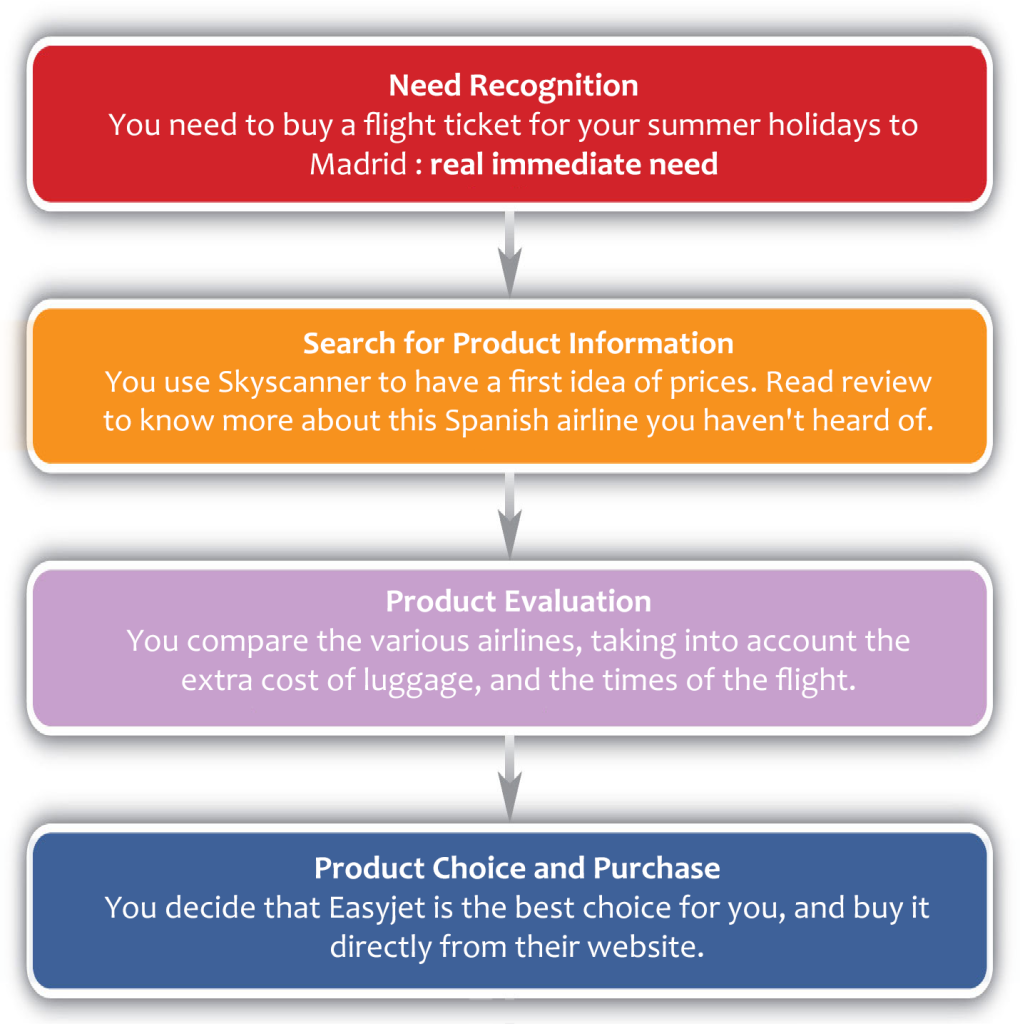 “Better” works well for Low Cost Carriers because it answers a real immediate need from consumers. But let’s not underestimate the importance of a new business model that helped the pricing structure, much more than just new technology or an absence of legacy infrastructure.

“Better” for a financial product such as FX transfers 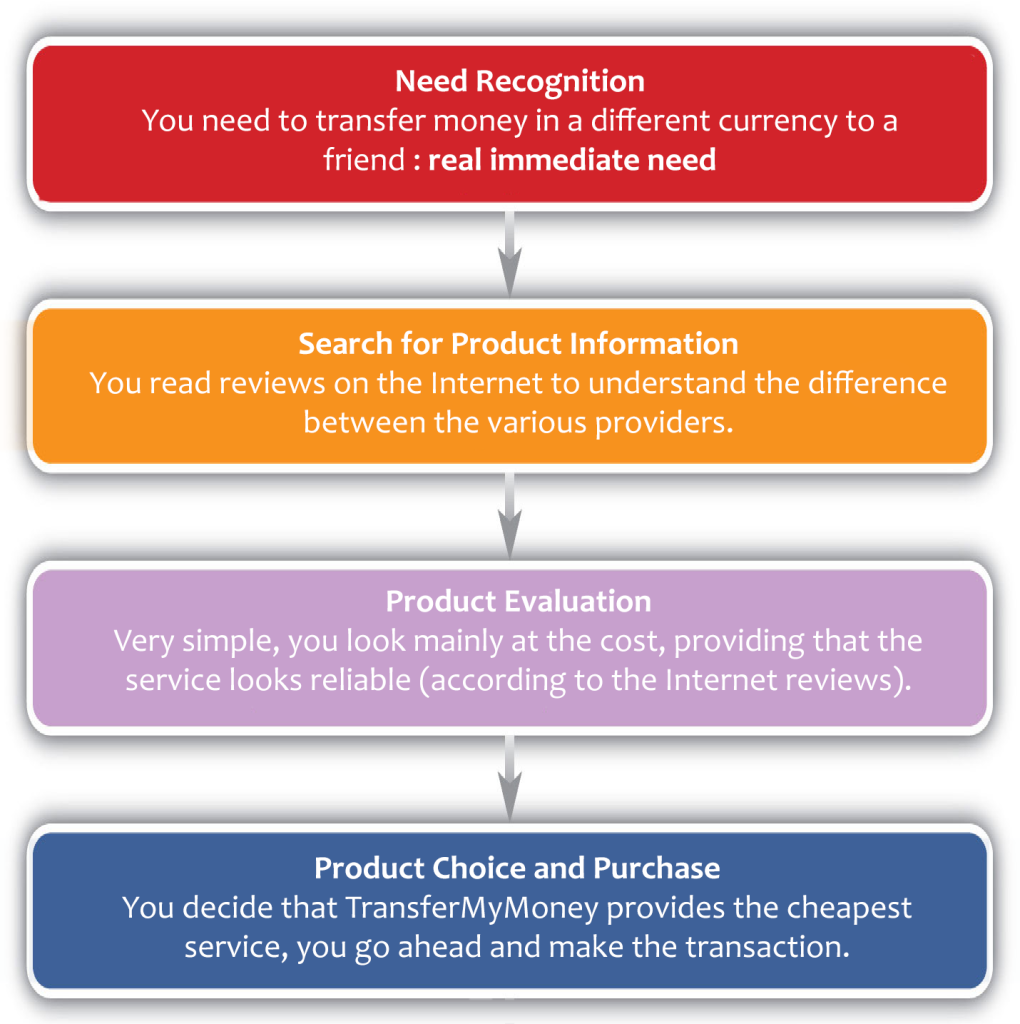 “Better” works well for FX transfers because it answers a real immediate need from consumers. But with the risk that profitability is difficult when price is the main differentiator and there is little barrier to entry.

“Better” for a financial product such as Challenger Banks 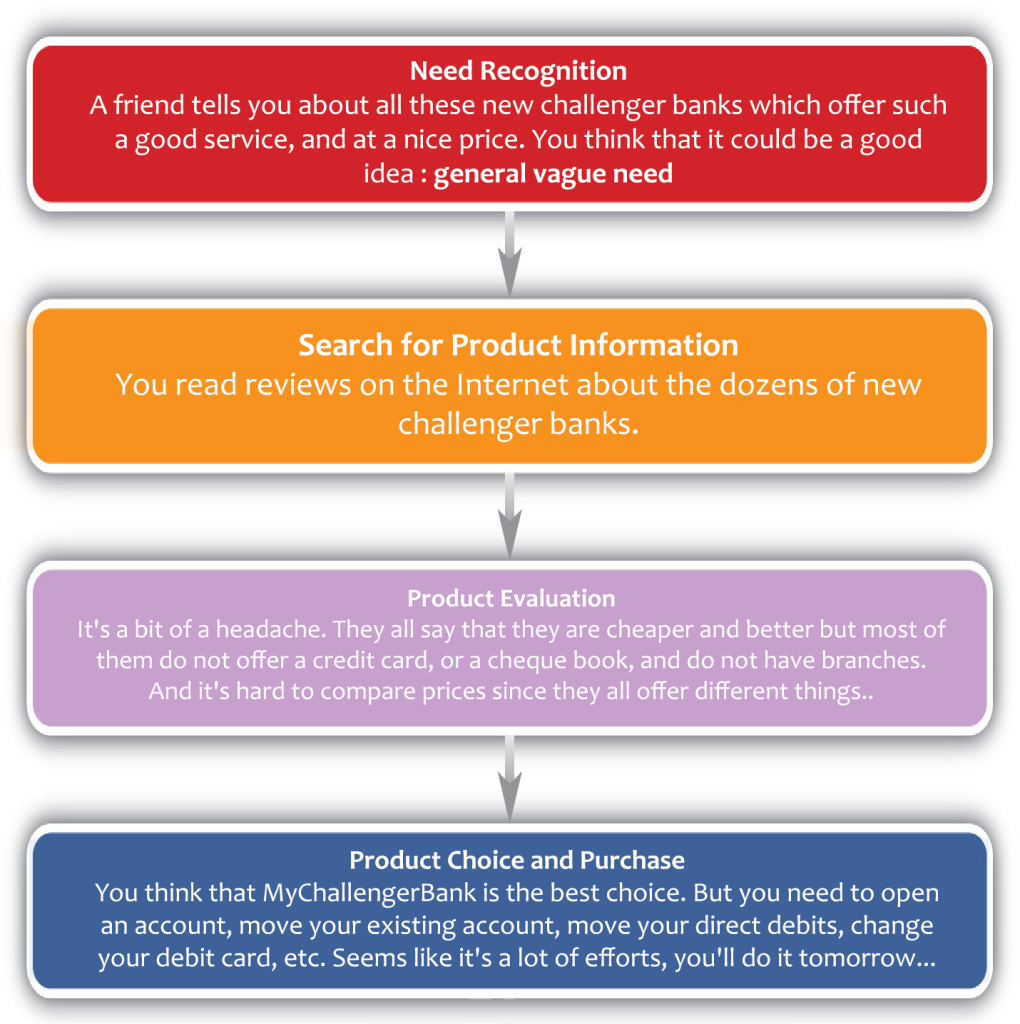 “Better” is a challenging value proposition when there is no real immediate need, but more a vague general need, resulting in a high customer acquisition cost to convince consumers

To summarise, Better in financial services means:
– Already a demand, but competition from large established players
– Challenging if the main value proposition is mainly in “cheaper pricing” (low barrier to entry) -> low margins, with risk of further margin compression
– Challenging if doesn’t meet a real immediate need, because consumers will tend to procrastinate -> high cost of customer acquisition
– But benefit of a very large amount of data and industry experience that makes the business more predictable.

The current financial products have been designed for the 20th century, when commerce and society were very different. As the world has changed because of technology, there is no reason why new financial products should be a replica of old products but with a mobile interface. If we had just replicated the old with new technologies, we would never had seen the creation of Facebook or Google…

The pro of Different is that there is little competition from existing providers, the con is however that there is no existing market, which  means that the value proposition has to be incredibly compelling for consumers to try something new.

Different doesn’t have to be revolutionary though, and does not even need to have a strong technological differentiator. A few examples of Different that comes to mind could be:
– Different target market: SMEs would be an obvious example, which are in general underserved by traditional finance because it’s economically expensive. SMEs usually require a lot of manual input (like large corporations), but have a profitability that are sometimes closer to retail: the worst of both worlds almost. But for startups that focus on automation, this is an attractive market with less competition.
– Filling a gap: credit card payments would be such an example. Although they have been around forever, the complexity of setting up credit card payment for small merchants and online businesses have given rise to the Stripe and iZettle of this world. Again, nothing revolutionary, but in a world where card payments are now ubiquitous, it’s an obvious gap to fill.
– New business model : this is the example of p2p lending, which was totally unheard of a few years ago: whereas banks had been the central agent between investors and lenders, the p2p platforms created a totally new business model where retail investors could lend directly to other consumers or SMEs. Another example is one of my favourite Fintech startups, Credit Karma, that offers free credit scores to consumers, and makes money with targeted offers (e.g. Google applied to finance…). It’s interesting to see that they are now the most downloaded finance app, both on Apple and Android – a good example of the success of a “different” approach.
– New product : and of course, totally new products would be in the “different” category. Blockchain would definitely be a prime example  of those (and also a good example of how difficult it is to create a product that is radically different). Venmo would be another good example.

In summary, Different in financial services means:
– No existing demand, and therefore little competition but very hard to assess the real user interest
– Instead of starting from an existing service, benefit of starting from a perceived need, and build a product that meets that particular need
– Price competition is less of a factor
– Very unpredictable business: could be the next Facebook* or a total flop. 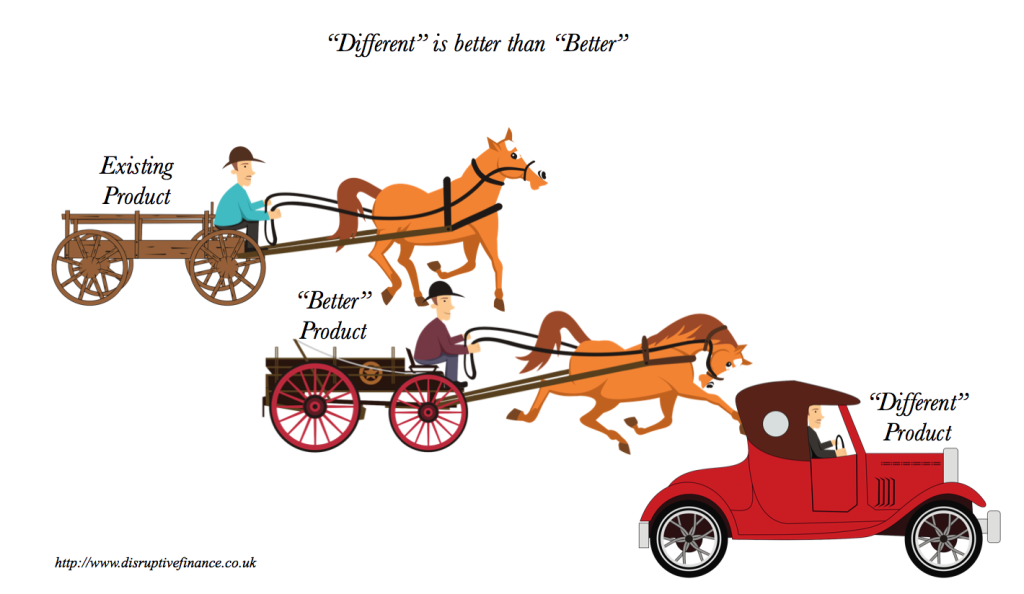 Obviously, my five-word catchline is only this: a very simplistic way to look at the Fintech world. There are numerous examples of startups that are better than existing offerings, and will do very well. There are many others that offer a very different product and will struggle. And of course the world is not split between startups that are Better and others that are Different – most will be a mix of both or neither… And finally, the devil is in the details: for example, are all challenger banks an example of “Better”? Not at all.

But in a universe of thousands of startups with countless new products,”Different” vs “Better” could be a useful reading guide.

*If you read the “Anti-Portfolios” of VCs, i.e. the list of startups that VCs missed and wished they had invested in, most of them fall in the “Different” category, i.e. startups that were truly disruptive – and became powerhouses. But again, most “Different” startups never find a market and fold quietly…

« Who said: “Our competition could be Google or Facebook” ? » How Fintech is forcing banking to a tipping point [Citi report]