Can a Disruptor grow 10x faster than an Incumbent ?

How quickly can Disruptive Innovation revolutionise existing industries ? For many reasons, I think that finance will be drastically different in 10 years, but what can actually happen over a 10-year period ?

Let’s try to be systematic, and since I use a very simple framework to look at startups, let’s use the same approach and see how various industries were impacted.

New entrants : doing the same from a blank sheet of paper with no legacy infrastructure

Most of us use Low Cost Airlines, and it is an example that shares a lot of analogies with finance : airlines are a highly regulated industry, trust from clients is very important, and that industry was dominated by some very large companies.

In a period of 10 years, LCCs went from almost zero to 35% market share through a very simple method :
– Start from a blank sheet of paper,
– No legacy infrastructure (i.e. ageing planes, high costs such as payrolls, pensions)
– Very simple offering which allowed to use one model of plane
– Modern IT systems adapted to the simple offering

Although there are many differences with banks, the conclusions are still very interesting :
– In a highly regulated industry, new entrants were able to grab 35% market share in 10 years
– Because they had no legacy infrastructure and costs, they manage to have a cost structure 50% lower than incumbents

Unlike New Entrants, Disruptors are not companies that will try to do “more for less”, but will actually create new products and business models. The example of music is very telling, because digital music 15 years ago wasn’t seen as a threat to established companies – bad quality, only for hackers, could not be monetized, etc. 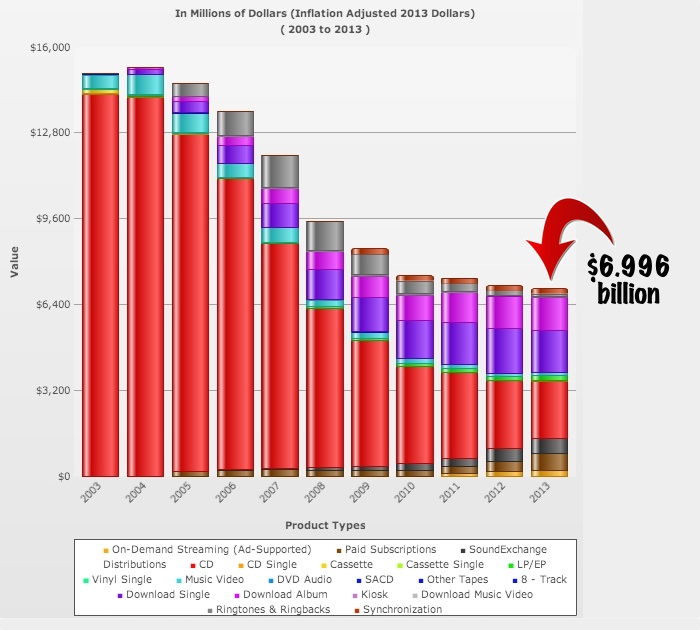 In this very extreme example, the results are frightening :
– In 10 years, the disruptors took almost 70% of market share
– The established standard (the CD) lost 80% of revenues
– And very interestingly, the whole size of the market collapsed by 50% in real terms.

Outsiders : leveraging on a particular strength to penetrate a new market

On a very regular basis, we hear about Google (Amazon, Apple, Facebook, Vodafone, etc.) ready to launch a new product in payments (lending, deposit accounts, etc). The main rationale is that these companies already have a very large customer base, and a lot of information about their users.

-The average money market fund in the US has an AUM of $5bn. It took 3 months for Alibaba to reach that level.
-It took the 3 largest funds between 10 and 20 years to reach $90bn. It took Alibaba 1 year. 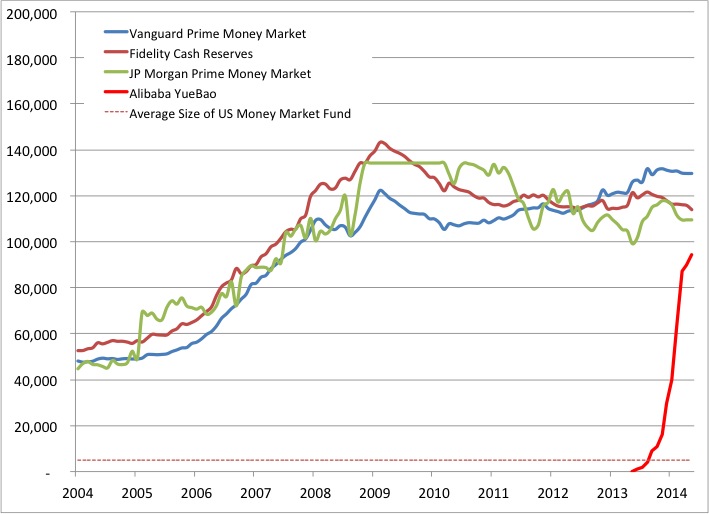 Here again, the results are amazing :
– In 1 year, Alibaba grew 10 times faster than the best funds to reach $100bn and to become the 4th largest fund
– It leveraged on its huge reach (230m users) with a high level of trust (12bn orders in 2013) to offer a new product with little marketing costs
– It did not need to re-invent the wheel – just bought an asset manager (Tianhong)

Looking at the previous examples, the future looks challenging for incumbents. However, consider the following graph :

Consolidation of US banks – From the Milken Institute

What we see from that graph is that if it took 10 years for various industries to be totally disrupted, the large incumbents in finance are still totally immune. On the contrary, the top 10 banks in the US have increased their market shares from 25% to 65% during the last 20 years. I suspect that the results would be the same for the largest asset managers, insurance companies, online brokers, etc.

Which means that in finance, there are large and massive incumbents that dominate the market. Which means that they have certainly the resources to react to various threats – e.g. by acquiring disruptors or investing in them as we have seen recently with Simple or Santander, or partnering with startups too.

In summary :
– The incumbents in finance are massive, and have grown bigger
– They have therefore the resources to adapt to disruptive changes
– How they will do it is unclear at this stage

Many industries have been disrupted since the creation of the Internet. Over a period of 10 years, it is totally possible for disruptors to take between 30% and 70% of a whole market while pushing margins lower. But because of their massive reach, it is also important to watch the big Internet companies – that have proven that they can grow 10 times faster than even the fastest established company. Financial companies still have the benefit of their very large size though, and have therefore the means to adapt.

« Where is the stock market going ? » What p2p lending can learn from traditional finance