How a Fintech company could lose $200m. In one day.

A bank can lose money because it takes risks on its balance sheet, but what about a Fintech startup that only acts as an intermediary ?

I wrote in a previous article about the financial concept of Principal vs. Agent, and how disruptive finance has seen a lot of companies focus on being Agents, in other words push for Disintermediation.

Because the Principal (e.g. a bank) takes a credit risk and an Agent (e.g. a p2p platform) does not, it may seem that a Principal business model is much more risky than an Agent model. If I had asked “Can a Bank could lose $200m in one day ?”, the amount might have seen high, but not necessarily shocking because banks take Principal risk. But how could a Fintech company lose that amount if it only acts as an intermediary ?

Actually, we don’t have to look too far to see how it could happen – this is exactly what unfolded last week with the removal of the EUR/CHF floor.

Here is the background : (If you want an interesting summary of what happened, you can read this)

– In 2011, because of the European crisis, investors were scrambling for safe havens, buying Swiss Francs (considered as safe) and selling Euros (considered as risky)
– As a result, the Swiss Franc appreciated sharply, which made Swiss exports much more expensive, and put a strain on the Swiss economy
– The Swiss National Bank decided to put a stop to the Franc’s appreciation and declared a “floor” of 1.2000, effectively saying that a Euro could not be less than 1.20 Franc.
– Whenever the Euro risked breaching the floor, the SNB would sell CHF and buy EUR to push the exchange rate back up – they bought hundreds of billions of Euro assets since 2011.

For the last few years, the EUR/CHF exchange rate has therefore been very stable, hovering slightly above 1.2000 as can be seen from the following graph: 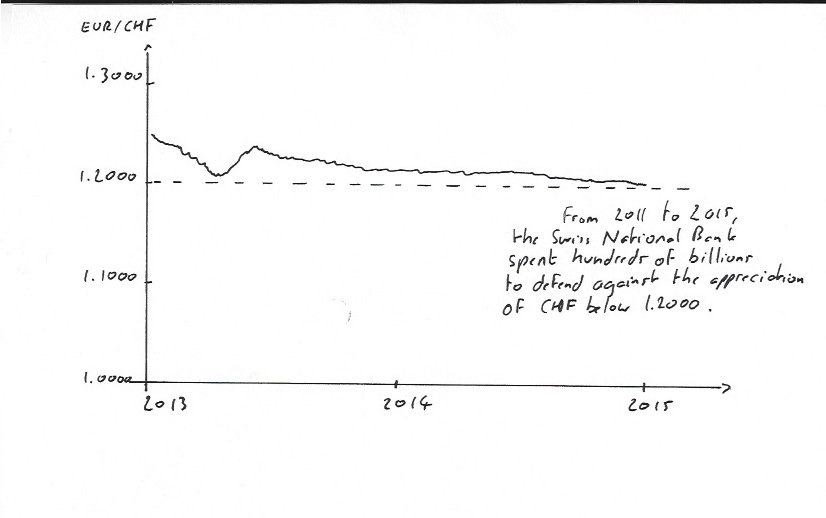 The EUR/CHF was stable for years

So what happened last Thursday ? The SNB took the market by surprise and declared that the floor was no longer necessary. What followed was the largest FX crash I have ever seen, with the Euro losing 30% of its value in 15 minutes! 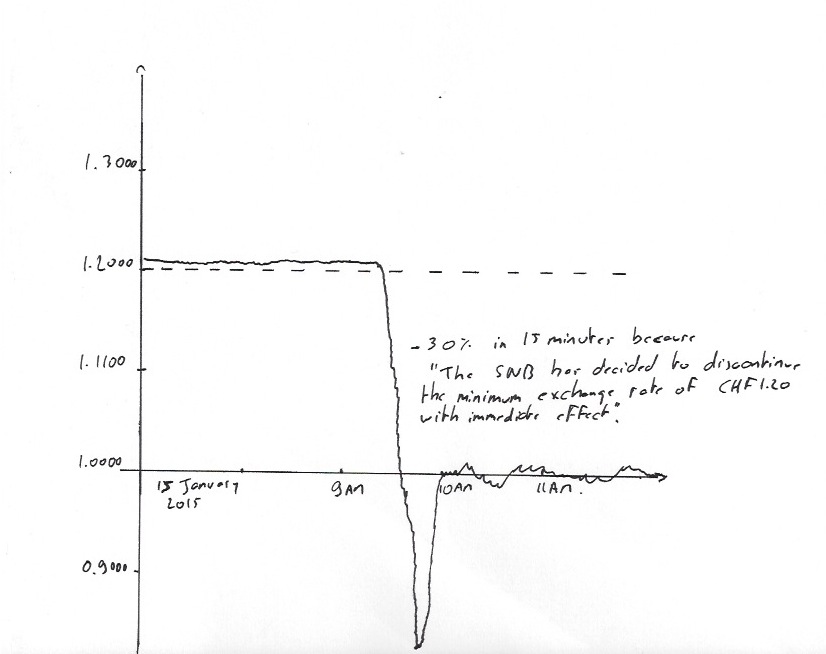 In a matter of seconds, the EUR/CHF collapsed

Saying that a lot of investors lost money is an understatement. We have seen a hedge fund close because of its losses. Banks losing hundreds of millions.

But back to our question, how could a Fintech company lose money in such a situation ?

What happens to my broker (a Fintech Agent in a Disintermediation model…) ? In theory, nothing since I was the one who lost CHF 35,000. In practice, that’s not true at all, because the broker was suddenly hit by 3 different types of risk:

– It suddenly has a huge counterparty risk: whereas my broker knew that I could lose CHF 500 (because I had deposited CHF 1,000 of margin), the likelihood I can pay CHF 35,000 is suddenly much smaller. Even if it can’t collect CHF 35,000 from me, it still has to pay CHF 35,000 to the market counterparty that hedged its position. So my loss becomes my broker’s loss.
– It also had a settlement risk: many transactions that day were cancelled because trading systems went haywire. So my broker who thought that it had exited at a certain level might have lost much more than thought.
– And it was also impacted by the market risk, in case it had offered me a guaranteed stop loss. This is when my broker guarantees a stop loss at 1.1960 in exchange of a small fee. In that case, I would have lost only CHF 500, whereas my broker would have lost CHF 35,000.

These events did unfold in precisely that way last week, and we witnessed some FX brokers going bankrupt or losing hundreds of millions. We can argue that it was an exceptional event – which it was – but how many such “once in a lifetime” events have we witnessed during the last 10 years?

What does it mean for Fintech ? It means that a business can be impacted by financial markets, even if it’s an Agent in a Disintermediation model. We saw a similar phenomenon last year when dozens of p2p lenders in China went bankrupt – not because they were taking credit risk, but because their models could not withstand large defaults from their clients.

The truth is that any business, Fintech or not, will have risks. It just happens that Fintech companies will be more subject to risks from financial markets and this should be taken into account at the business model stage.

PS : thank you to Dan Dzombak for his comment on Twitter. As he righty pointed out, the currency broker is not just an agent, it’s also a principal because of the leverage it gives to customers. So there is definitely principal risk in there. But if instead of currencies (which are OTC, over the counter), I had considered equity indices such as the S&P 500 (futures traded on an exchange), or interest swaps, (that can be traded through a clearinghouse), then the separation between agent and principal becomes even more blurry – if not from a legal standpoint, but certainly from a risk standpoint. Which goes back to the point that even for a Fintech company, the risks are not always straightforward.

* Very simplified assumptions and calculations, just to give the idea of the trade.

« Update: Spain now ahead of New York in Fintech! » Fintech scene in the UK. And in Switzerland. And Germany. And Romandie!