“Hopefully, the growth of peer-to-peer lenders and those involved in crowd-funding will help solve the problems we have with lending for small and medium enterprises..” (Andrew Haldane, Bank of England, 2012).

It is certainly very rare to have such an endorsement from a Central Bank about a financial innovation. P2p lending certainly has a lot of positives going for it :

Apart from these undeniable facts, there are also a lot of marketing gimmicks (and usually very misleading) to tempt lenders, for example guarantees against defaults.

Having had many discussions about p2p lending, it seems like the pros and cons of p2p lending for lenders or borrowers are clearly important, but miss the most critical difference.

If you remember the subprime crisis, you’ll remember that the designated culprit for the crisis was the infamous Collateralized Debt Obligation, or CDO. Many commentators argued that these repackaged loans were toxic because the banks did not have any vested interest to check the quality of the borrowers, since they were not the lenders. In other words, the banks acted as an agent, and not a principal. And the principal (e.g. a German lender) was too remote from the actual risk.

Isn’t it the same problem with p2p lending platforms ? Instead of a bank lending to a borrower – i.e. with a vested interest as a principal – we now have a p2p platform that acts as an intermediary and the principal is now an invididual who is supposed to invest in hundreds of loans (which by the way is a well known financial instrument called an MBS or Mortgage Backed Securities, i.e. individuals investing in MBS!). 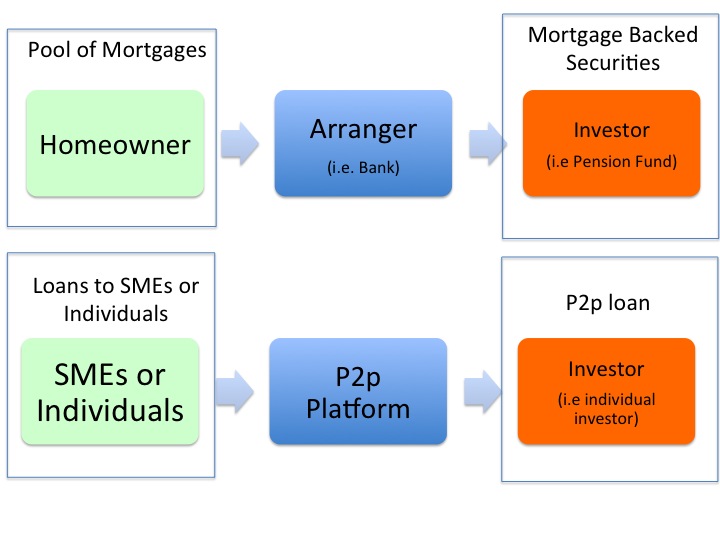 It seems strange that a p2p loan can be compared to a Mortage Backed Securities, but doesn’t it look similar ?

Does it mean that p2p lending is a bad thing ? Not necessarily, but it’s dangerous to see only the pros when it has some of the features of a subprime CDO, i.e. :
– spreads risks to a lot of different investors,
– the – unsophisticated – principal is not investing directly, but through an agent,
– the investment seems “safe” because it is spread accross a lot of different entities

Although the regulator (i.e. the FCA or the SEC) have identified the risks of p2p lending, the answer so far was to make sure that p2p lending was marketed properly and to the right individuals. However, they do not address the core question of whether the business model of p2p lending poses a risk to financial stability.

Clearly, the model of p2p turns traditional banking on its head and is a key pillar of Disruptive Finance. But in my opinion the existing p2p models are not robust enough to withstand a financial shock and could lead to bad surprises. Like many models that aims to desintermediate existing players (i.e. Airbnb, Uber), the pros are many. But unlike hotels or taxis, unintended consequences in p2p lending could have much more serious impacts.

» What is the value of Bitcoin ?